I have a confession to make right at the start: I have always been fascinated by the physical universe, and in college, my focus was astronomy and physics. I learned about the movement of celestial bodies and why planets and stars moved the way they did. I was seriously skeptical about astrology, which explains what kind of influence the positions of these bodies had on the natural world and people.  Then, something happened: I fell in love.

I was in my third year of college. Dave was everything I ever dreamed of in a partner – tall, lean and athletic, with gorgeous blue eyes that made me melt. He was also intelligent and confident. Then, six months into our relationship, I had an opportunity to travel overseas for a year of college. I was excited about my trip. But Dave wasn’t. 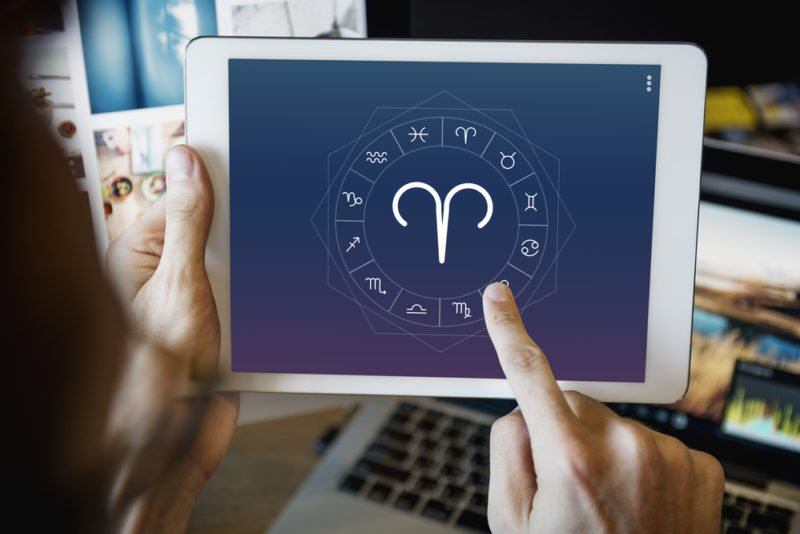 I loved Dave, but the chance to be an exchange student and see new people and places was like an urge, something I had to do. In the end, we broke up over it,  but I never made it there, and I regret it to this day.

A few weeks later, I was thumbing through the student newspaper when I saw the astrology page. I scoffed at it but read my horoscope. I am an Aries. The astrologer wrote that people with that birth sign love change and love challenges. To me, life is always in the very moment. Dave, a Libra, was the exact opposite of me. The things I read explained why we broke up.

I dove in headfirst and studied astrology and the relationships between celestial bodies with tremendous respect and a deeper understanding. I’d love to share with you what I learned about my star sign, Aries, and dating a man who is an Aries.

Aries men were born between March 21 and April 19. They are fiercely independent and believe they must handle all of life’s challenges on their own without any help. There’s a great sense of accomplishment in an Aries man when he overcomes complex, even impossible, challenges on his own.

Aries men want to keep on moving and get impatient when everything stops. To them, life is too short to sit around and watch TV or play with their phone.

Who is the Best Match For an Aries Man?

Aries men do best with women who can deal with him being insensitive from time to time since he’s always in search of new thrills and new challenges and may say insulting remarks. A woman who can be patient and teach him how to slow down, relax, and occasionally take it easy is the best match for an Aries man. He wants to face new life challenges by himself before he relies on his partner.

Aries men are better at accomplishing goals than dealing with the give and take so necessary in relationships. They may not be as sensitive as you, but that can be good, too. For example, an Aries man who falls in love (yes, they are quite capable of loving passionately!) will be excellent at caring for needs like buying a home and will work hard to keep it.

Are Aries Men Good in Bed?

Just like the way he faces challenges in life, Aries men take on sex as a conquest – he will pursue until his “prize” until he gets her. So it starts with the chase, and he pursues until you give in to his charms.

If you date a man born under the Aries zodiac sign ends in a sexual encounter, expect him to play a dominant role in bed. He will likely initiate sex and, once his passion is fired and once you consent, and with romantic force, he’ll throw you onto the bed!

Aries men have sex that is intense and romantic. He also has an unquenchable appetite for sex. I once dated a man who was an Aries. We met for dinner at a restaurant he chose. I wore a dress that showed off my cleavage, and that was cut above my knees. I’m not offended by men checking out my body; it turns me on. My date was not shy about it either; his eyes burned like fire by the time dessert came.

We got to his place for a nightcap. The drinks were poured, but we never got the chance to drink even a sip. Once he took me in his arms, I surrendered control and spent the night having the most passionate, satisfying sex I can remember!

What Qualities Are Aries Men Attracted To?

Aries men like women who are sweet, loving, and attractive. Such a woman may have been a tomboy when she was younger, who grew up with more brothers than sisters snd who learned to be “rough.” But when you dress up and look sexy on your date, he won’t be able to keep his eyes off you. He’ll soon forget anything about being a tomboy!

If you like adventure, trying new things without knowing the challenges, you’ll appeal to an Aries man. Some of your dates may turn into long hiking expeditions or bike riding through mountains. Aries men can be intelligent and educated, but they love action most. Think of Indiana Jones – a professor at an ivy league university who can’t wait to go out exploring and bravely facing danger and succeeding in his quest.

If you date an Aries man, you will be great lovers and act as his teammate. You’d be great in the role of “shotgun” on long trips together, and, if he’s a truck driver, you’d be a perfect companion to assist him in his work.

When you go on a date with an Aries Man, it would be best to leave your high heels behind but still look as sexy as you want. On the first date, though, make him lust for you with your sexiest heels and cutest dress.

After that, ears flats, jeans, and a halter top. Aries men are spontaneous, so you don’t know where you might end up after meeting for a casual breakfast or lunch date.

Patience and being open to new and different experiences make the best partner to Aries men. If you love being out in nature, you’ve found a perfect partner!