Tony and I had been regular fuck buddies for a while. We often lay when taking a break from our animal passion and talked about eroticism and more experimental things to do in the bed. You know the sort of thing that just thinking of it makes you have urges. 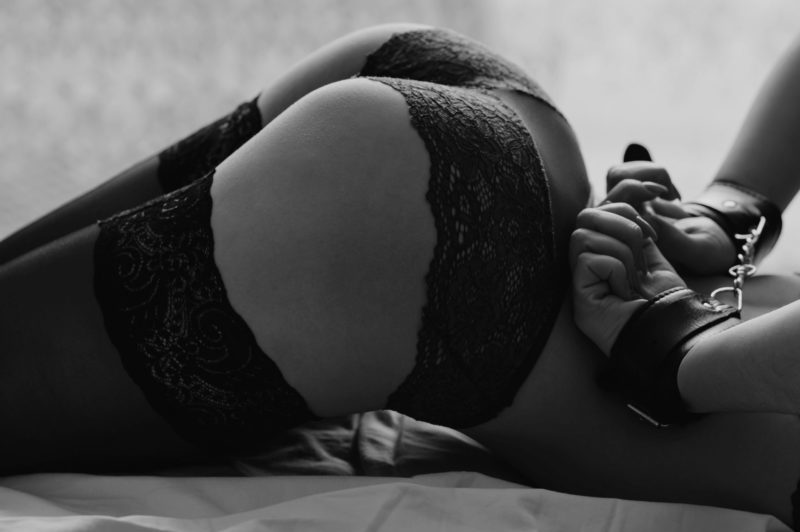 I had not seen Tony for a while. We always enjoyed our time together even though our relationship was mainly physical.  We liked sex. We liked it together. So I was excited when he texted. “Hey Mia, how are you about time we got together” “It has been hard without you?” “Why don`t you come over we could have some fun, I may have a surprise for you”

Surprise he said. Well, two can play that erotic game. It was a summer evening with a slight breeze. I put on a short thin cotton dress with buttons up the front. No bra no panties just me, sandals, lipstick, and a jasmine perfume on my boobs and musk on my vulva. I felt hot; the breeze hardened my nipples. I was wet already just with the thought of our last encounter. Tony`s house was not far. I went around the back into the garden. He was there sunbathing on a rug.  Naked on his back a glass of red wine by his side.

I watched quietly for a minute. He had not noticed me. He was asleep. I moved like a cat. I put my leg over his head and lowered my pussy slowly over his face. The musk infused scent of my wet pussy slowly woke him. He knew it was me and he put his arms on my waist and gently started to lick me. Then he started becoming more ardent rougher longer strokes along my lips I was dripping onto his chin.

I leant back and felt his hardness. He was fully erect. The head of his cock slippery. He was unbuttoning my dress hands wandering across my breasts flicking the hard nipples.  He pushed me backward and I guided him into me…

We both came really quickly a shuddering twitching kind of explosion. We fell into a heap. I drank his wine. Soft blackberry sensations filled my mouth adding to the savor of the moment.

He invited me in for another glass. I could see he was excited still. His cock was almost fully hard again. He went out for a moment. Came back. I could see he was hiding something. I started to ask if it was a surprise. He put a finger to his lip. Turn around and close your eyes. I did. I felt him close behind me. He reached around me. He put a sleep mask over my eyes. He has something else, a gag.

He patted my bum as we went is a reassuring way. I knew his house enough. We were going to the bedroom. Not his, the spare room.

He asked if I was ok to lie down. I nodded. He maneuvered me. I could feel a bed. Crisp sheets. He helped me lie.

Face up. He said he was going to arrange me if that was ok. I nodded. He briefly loosened the gag and gave me a sip of wine. Then spread my arms together above my head. Remember my dress was still on unbuttoned, my breasts were taut. My nipples started to harden again. He then spread my ankles so I felt my vulva exposed to his gaze. I could still smell the jasmine and the musk and our sex.

Then I could feel him putting a restraint on my ankle, then the other then my wrists bound together. I was feeling aroused and excited. I had dreamt of this but not done it. I was now at his mercy. He came to kiss my cheek. I could feel something slowly drawing across me tickling. It felt like a brush but it was something else. He then flicked me with it. It was some kind of multi-headed lash. My skin tingles. He was gentle getting harder half tickling have to whip my breasts and my tummy.

Then he started on my vulva. I thought I was going to explode. This had never happened and oh wow. I wriggled my bum and raised my vulva towards him.

Then he went down on me with his tongue I was getting wetter and wetter I could feel my own juices under my bum. He parted my lips and pulled my clit hard and held it between his fingers licking the tip. My back arched. I wanted to grasp him but I could not the ties were too strong and tight to slip. I felt my self wanting to come, so did he. He eased off a bit and started with the lash again. I could almost not bear it. I had reached the point where I would pull away. I couldn`t. I wanted to speak but couldn’t.

He just kept on and on and I came harder and deeper than I ever had. He did not stop, I could not rest, he started again. My back was arching again my nerves alive my mind racing the next orgasm coming. Even deeper. My pussy was twitching begging for cock I wanted to be penetrated like never before but could not ask or grab Tony but I could whistle through the hole in the gag ball and kind of nod. That I did. Despite the blindfold, I could feel that he looked up at me. I knew he would look at me with a cheeky smile. He slipped alongside me and kissed me with a big wet kiss all around my mouth.

I could smell my pussy on his breath. He rolled away said, “ wait a minute, and when I come back breathe out gently”. Then he went away; a few moments later he was back. I exhaled he put his mouth around mine opened his lips and gently squirted more wine into my mouth. It tasted divine.

Then he started on me with the lash harder this time more tingly but arousing even more. I just wanted him to fill me up with his manhood. My pussy was desperate for it. But he teased me still.

He next started adjusting the straps. At the same time, he kept lashing me. My restraints seemed longer at the top but before I could react he was pulling me down so my bum was at the bottom mattress edge. Then my legs were pulled up and further apart. He must I thought to have the ankle restraints suspended. I was stretched and hung with my pussy and ass wide open. My bum lashed and tingling at the edge.

He was humming. The tune was familiar. He pulled me higher in the air and put pillows under my back and bum. It only took a few seconds. I felt totally subjected to his will. My pussy still craved cock even more if it were possible. I was so wet the juices were running down onto me ass.

I was going to come but he knew me and sensed that he eased off enough to keep me close, close to physical paradise. Yet never quite reaching it.

Then without warning his cock was inside me but only a little. The sensations in my ass started again. His cock seeming to follow the pattern of the device his cock slid deeper and deeper back and forth my pussy muscle straining to grip it on every thrust. Feeling the sensations in both holes at the same time was swamping my whole being.  It was so so strong I could not hold myself back anymore. It was like the pleasure I never ever knew before deep deep sensations through my ass my pussy my clit my boobs my nipples my hair even felt alive just everywhere overwhelming me and still he rode into me.

My mind was in overdrive it was like an unending sexual rollercoaster. I was dripping with sweat and juices. I had never squirted before but felt that I would now I could feel it building within me building and twitching was like nothing before and juices squirted out of me all over me and Tony and at the same time he tightened and he squirted his seed into me. I felt we were melting fused together in ecstasy.   Tony turned the vibrations off somehow, stretched, and pulled the eyemask down so I could see him again for the first time. He was damp with sweat and my squirt. He looked at me and with his soft wry smile said. “Hi so let’s start again but I will let you watch us in the mirror this time…..” OMG

I thought he was joking when he said start again but he went away for a few minutes leaving me tied and helpless. Vulnerable and exposed. The room had a mirror on the ceiling and another unused hook up there. Tony came in. He had showered his hair slicked back. I was there still sweaty and smelling of my own juices. I wriggled and lifted my bum but it was all I could. It was good being able to see.

Tony came over and slapped my bum.

A hard slap. Painful but I liked it. The eye could show it in my eyes now. He watched me and slapped me again. More pain. He started sucking my nipple gently and then harder. Until it was as hard as can be. He attached a clip to it. It squeezed the nipple tightly. Then he did the same to the other one. The clips were on a chord. He threw the chord over the other hook. He pulled and my nipples stretched up. A heady mixture of pain and excitement. When he pulled I could feel my whole vagina reacting every tug made me hornier.

Now he tied the chord to my ankle so I could pull on it a little myself. I lay there looking in the mirror legs apart my holes exposed, my breasts stretched tautly and up. I could see it all. He picked up the lash and lashed me again. I was close to coming. Never quite getting there. Dripping wet again. Exposed and wanton. The pattern changed slower and pulsing.

Then I watched as he slid the handle of the lash into my pussy. It too started pulsing. As I moved my foot my nipples were stretched I was on fire. Watching all this.  I came in waves. I could not stop it. There was no escape. Tony stood holding himself in front of me. He straddled my face his cock above my nose. He was stroking it.

I was shuddering almost uncontrollably now. My body alive with feelings I never knew you could have. I hated him. I loved him. I wanted him. He could see the pleading eyes.

I needed him in me. So so badly. I never wanted anything so much.