David likes meeting people, women in particular. He is in pursuit of a new long term partner but as intimacy is important he wants to be intimate with them first before committing to anything more serious. He tells himself not to spend too much time on women who are too reserved. He likes someone with a sense of fun, able to let themselves misbehave. Lady in public less so at home. He also wants to assess other attributes, not least patience and loyalty.

In his short quest or mission he has come across women who want to have sex at the first opportunity but most want to wait. Most of the time David goes with the flow. He does not particularly care for being swept into bed on a first or second date. He usually resists that. Never say never but it is rare. However, if it goes much beyond the third or fourth proper date he wonders why. Having said that he has only dated three women in the last year and only one of them more than three times 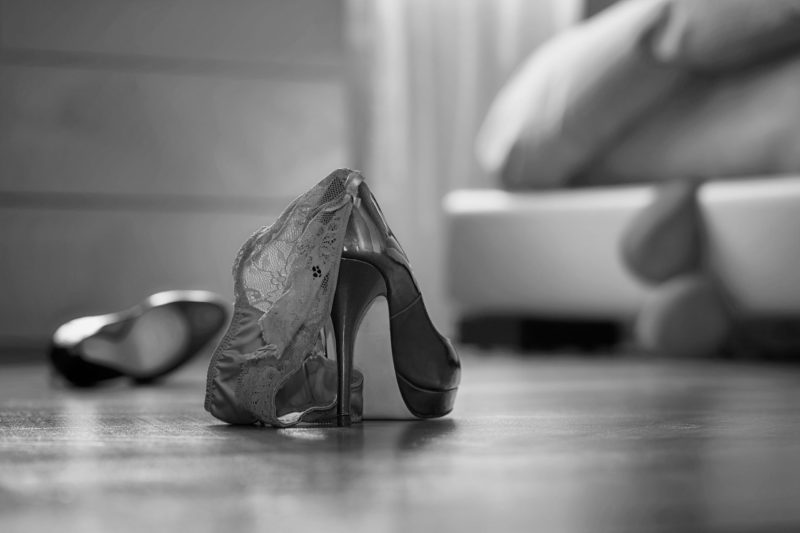 Today David is reflecting on the advice he has for himself if he ever does get intimate with someone again. His principle view by which he lives is to ensure the woman enjoys herself. He wants her to come first and come often. He knows there is a risk of her falling for him because of it. Mainly because he hears many men are sexually selfish. David gains pleasure from pleasuring. He has met and thinks he likes Connie. Connie is divorced and has one almost adolescent child but Connie has a sweet nature. Pretty pretty woman and with what he sees as a very good body like a twenty-year-old.

David and Connie have met three times now and kissed briefly on the first date, snogged on the second and did some snogging and light petting on the third. He felt the moistness of her pussy for the first time through her tights and panties. She rubbed his cock through his trousers. Ready for more by mutual agreement.

David has carefully set the scene. He has booked the night away in a good hotel. They have arrived and are checked in. Mutual intent is there. David avoids the temptation of watching Connie changing for dinner although she left the bathroom door ajar, and probably deliberately. Negroni’s before dinner. Dinner is good the vibe is good, flirtatious.

David`s advice to himself is stay alert but don’t be shy. Take charge but don`t be too dominant. This is a journey of exploration. He and Connie have talked a bit about what he and she liked but now was the time to relax and explore. Intimate contact is about understanding what the other person likes.

Holding hands after dinner David firstly took Connie for a walk in the beautiful hotel grounds. He stopped and kissed her gently on the mouth with his hand on the small of her back. He assessed her breathing and kissed more intensely parting her lips with his tongue exploring inside tongue probing, he chewed her lip. She responded. He touched her chest. Hand in the middle. Take it slow. Concentrate on arousing her. Then moving to cup one breast while still kissing. Applying pressure. Feeling for the nipple and circling the hand around it. Moving to kiss the neck below the ear. Connie is responding now clasping David`s hand and directing it towards her thigh.

David complies but assessing if the time is right whispers come on let`s go in. Connie nods. Hand in hand they stroll towards the room. David stops them twice for a further snog. Maintain momentum. Deep lingering kisses stimulating excitement and touching erogenous zones sensitively.

Back in the room David closes the door and kisses again. The lights are down as he left them. The bed has been turned down. Not by Connie he thought. She is far from turning me down. Connie is now in his arms. Kissing David like a woman possessed. She is pulling his jacket off and unbuttoning his shirt, pulling him to the bed. Slow down he thinks, best not to rush. So he says hang on a minute and puts on some music, slow romantic music.
He turns and kisses Connie again holding her with both hands by the bum. Starts kissing her neck again working down between her breasts his hand reaching to unzip her dress. The zip comes down to her waist and he has his hand on her back. Still kissing but stroking her back. Unclipping her Bra important to make light of it if fumbling. Dress and bra slip to the ground. Connie, in her panties and heels, is still kissing passionately her soft breasts and hard nipples pressing into his chest. David bends and picks her up and takes her to the bed. They lower themselves mouth to mouth chest to chest onto the firm bed. Now David starts to explore with his mouth. Hand on Connie’s thigh holding her gently the side of his hand gently brushing across her pussy.

He has his hand now on the outside of her panties running along the edges slowly. Her warmth and moistness is apparent the sweet fragrance of wet pussy discernible above her subtle perfume and his aftershave. His hand slowly moves in from the edges horizontally along the top, an inch down. The panties are skimpy plain but sexy. The fingers start drawing a triangle down around the vulva. They trace just inside underneath. His guess had been right she is as smooth as smooth not a trace of stubble. His chin was less smooth even though he had shaved before dinner. Always shave before a date you don’t want stubble irritating soft skin.

His mouth moves to her nipple. She moves to facilitate. Her hard nipple is sweet between his lips. He knows to explore and gauge the reaction. Sucking twirling flicking and chewing. She seems to like sucking and twirling best. He switches nipple and decided twirling is the most effective.

David is considering what to do next. His fingers going lower down her vulva tracing a longer triangle. Her panties are showing wet now.

He continues gently to see what she does.

She is starting to move. Pushing her breast and pussy harder towards him. She whispers in his ear. “Would you like to lick me”.. “please lick me”. David slides down so he can get between her open legs. His left hand pulling and squeezing her right nipple. She opens her legs further. He thinks I could get used to this view. He pulls her panties aside. Her pink pussy is slick with juice. And starts to lick. And lick and lick long strokes, as Connie starts to moan she also decides to take the panties off. One leg at least. The panties around one ankle. David prides himself on his ability to lick but knows not to overdo it. So he slows down to see what happens, know guidance should come.

It is not long before the guidance comes. “Finger me” David obliges with one finger then two and Connie relaxes under him as he continues to lick and roll his tongue around her labia and clit. David does not hurry this as he knows if he is patient and she can be kept patient she will have a deep orgasm. His fingers work deeper inside her and he works her pussy up to her g-spot.

His cock is now rock hard and he is aware he could come too early. So he slows himself down and focuses his mind entirely on Connie’s left hand on her breasts tongue working her pussy and fingers inside it until she starts to raise her bum off the bed and move rhythmically with her hips. She wants to be fucked. Normally David would override this but tonight he knows she might be cross with him. So he rolls lies on his back and pulls her over onto him…

Connie sat looking into his eyes, her eyes having the focused glazed look of a woman intent on fucking you and being fucked. David likes that wanton look in a woman`s eyes.

She tossed her head back flicking her hair away from her breasts and raised her leg so she was bent at the knee on her right leg and then guided herself onto him. Slowly moving rocking back and forward to rub her clit with the top of his cock. Then lowering herself on to him and bent at the knee still able to work up and down and back and forward and sideways like a teenager with a joystick. Squeeze my boobs she whispered but loudly.

He lay while she pleasured herself on him. He didn`t know about her but he was getting close to coming. She was quiet animalistic riding hard her pussy tightening around him her one big muscle working to full effect. She was totally absorbed smiling with the pleasure of it. If it was possible he got even harder. She moved so her legs were now level and she worked on He was holding on know trying hard to come when she did. His palms flat rubbing each nipple she started to tremble and was clearly close herself. He could wait no longer but she was clearly coming and now sensitive. His stiff cock pulsed into her. She came deeply quietly. No noise no fuss. Relaxing into it and leaning forward onto him. They snoozed for a bit.

Then Connie reminded David she wanted to watch something on the TV, a movie she been waiting to see. In the hotel toweling gowns they sat on the sofa armed with drinks and crisps which Connie made appear from her bag. It was a romantic comedy. David sat for a bit watching Connie more than the movie and then put his arm around Connie and started playing with her right nipple, which grew under his touch; she kept watching but leaned over on to him. The hand strayed downwards on to her pussy and onto her clitoris and David carefully brought Connie back into a state of arousal the clit hardening under his careful touch her warmth and moistness apparent to them both. He worked her gently to orgasm as they watched the romance develop before them. She smiled a happy smile.

2 thoughts on “Intimacy In A New Relationship”